Note: Do not empty your party for this section of the game. They are required after your meeting with a main character.

To the east of Area 1 is a broken bridge next to a truck. Once Fardy Hernandez is found from the Joy Factory, he will claim the Truck and fix the bridge, allowing Brad to pass to the next area. This then allows for the Truck Keys to be used to instantly transport to a hub you have already visited.

When you progress past the bridge, you will have to quickly dive down the rope in front to avoid taking damage from a passing car. This deals 600 damage to the party with no permanent effects.

A masked man, Crush Mahone, will attempt to ambush you as you approach the next rope. You can climb the rope to avoid his ambush, making his fight significantly easier as he trips and is somewhat incapacitated during the fight. You could also choose to ignore Crush after he fails to ambush you, since he does not move after falling. If you enter the hole in the wall Brad will have another vision of Lisa.

Carrying on to the east, Brad will meet a man that seems to have an interest in his items. Upon being walked past, Cosmo Cassamassa will run up behind and ambush Brad's party. Using an item that fills an empty bottle, such as a water bottle or a bottle of soup, while Cosmo is chasing you, will result in skipping his fight.

Blocking a door, next to a Save Crow is Sweet Tea Rakeem. If Pain Mode is currently active, he will be aided by Vic Cherry. The rest area here is the only one with a 100% chance of nothing happening.

After travelling through a cave, Percy Monsoon will be attempting a take a dump only to be interrupted by a spider. Once Brad valiantly defeats the spider, he will join brad's party. 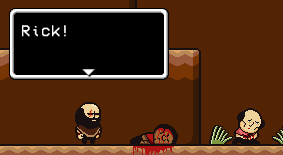 Rick is found to the east, injured on the ground. Ricks eyes light up as Brad exclaims that he is thankful that Rick is alive. After asking where Buddy is, Rick swiftly runs away from Brad. With a hallucination of Lisa onlooking, Rick punches Brad as he approaches and runs away again. Brad catches up to Rick and tackles him. 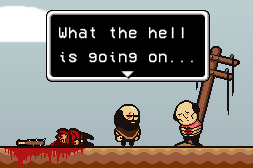 After a black screen disappears, Brad asks Rick, whom he has tied to a power line pole, "What the hell is going on...". Rick tell Brad to "Stay out of it". Brad asks Rick where his 'Daughter' is. Rick scoffs at the idea that Buddy is his Daughter. Rick exclaims that Buddy is 'gone' and that she doesn't belong to Brad any more. He says that "We're saving the world Brad. She's out only hope for repopulation and you know it.". Brad tells Rick that he should know what they will do to her, however Rick retorts with "What do you suggest we do? Just die off?" . Rick lays into Brad, saying that his little "family" isn't as important that the rest of the world and that he knows he is concerned with Buddy due to the guilt from Lisa. Rick then calls Brad not a father but an addict (Brad will say he's gone clean from joy whether or not he has been using it up to that point.) Brad proceeds to punch Rick, one of his only friends, in order to him to tell Brad where Buddy is. After hitting him for a while, Brad decides enough is enough and picks up a nail studded club nearby. The flesh background appears due to the stress and shows that he is further and further giving into the Joy..

Brad proceeds to maim Rick with the club. After two swings, Rick begs for Brad to stop. In his trance he continues to maim Rick with the club. Rick exclaims that "Buddy is with Sticky, hidden in a cave for Rando's--". Brad continues to hit Rick repeatedly with the club. The flesh background appears showing his transformation is occurring quickly as he attacks Rick more. After the screen turns red, Brad wakes up to find Rick seemingly dead and himself in the floor passed out. Continuing to the east, Brad sees a face poking out from behind a cliff wall. Upon passing, Joshie Brighteyes jumps out with his two eyepatches brandishing a blade. After the fight Brad can enter the cave.

Upon entering the cave to the east, Brad is met by a group of pink masks and a man with a match illuminating his face. This man greets Brad to Brad's surprise and in return Brad asks how he knows his name. He says they "Go way back". His gang will grab the second member of Brad's party (Even if they are not present in his active party) and gives Brad an Ultimatum. Brads arm, or the life of his team mate. The man asks if Brad has "changed at all". He will request Brad's arm for the party members safety. If Brad refuses, he will kill the party member permanently. If he accepts, his arm will be cut off and his ATK & DEF will be decreased. This removes all abilities using his left arm as well as increases his addiction for Joy.

Upon exiting the cave, a dying man is found next to a Motorcycle, the man gives Brad his motorcycle and a short tutorial on riding it. This begins a Motorcycle segment in which Brad rides up and down hills and over gaps, doing wheelies and killing people by running them over for EXP. The music that plays in this area is called "Burning Sunset".

After this segment has been completed, Brad crashes into Rando, flying Brad many feet. Rando whispers to another man to tell Brad that he is sorry, offering his food rations to Brad, 8 Rando Rations. As Rando leaves, his gang refuses to let Brad get away with taking the rations and will fight Brad and his party. This group consists of Vernon Red, Warren Red, Don Skin and Laser Aldino.

To the east is a Save Crow and an entrance to a cave.

There is a hollow-eyed man just inside the cave who stares into the wall and declares "Thou art God" if you speak with him. Further in, a man stands atop an inaccessible ledge lit by a candle. He will points at Brad, then exit through a hole in the wall as you pass. This man is part of the group that will ambush you upon exiting the cave.

Upon exiting the cave, Brad will be ambushed by a group of men and taken to the Roulette. 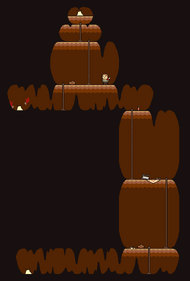 Upon leaving the Roulette Building, a cave can be entered to the east. This leads to the Shore and back to Road to Area 2.

Mike Pun Master is waiting for you inside this cave. If you talk to him he'll ask if you want to hear something funny. Regardless of which option you choose, he'll tell a pretty lame joke. If you agree that the pun was funny, you'll have the opportunity to replay the interaction. If not, he will be angered and attack.

Taking the bottom cave route will lead you out a hole where you can talk to a guy. He'll leave you a nice hat after jumping into the ocean.

Taking the top route will lead you to a new screen. There is text near the bottom right-most ledge prompting you to jump. You will not die if you jump, you will simply take damage and wind up at the cave bottom route exit.

Upon entering Road to Area 2 again, you will meet the Salvation Rangers. Defeat Blake the Snake and enter Area 2 to the east.

Retrieved from "https://lisa-rpg.fandom.com/wiki/Area_1/2_Transition?oldid=31173"
Community content is available under CC-BY-SA unless otherwise noted.