Area 1 (Crossroads) is the first main hub of Lisa: The RPG. In order to proceed with the game, the various sub areas must be visited in order to fulfil objectives, advance the story and get past the truck to the east.

The Crossroads are first seen after leaving the Path to the Beginning. 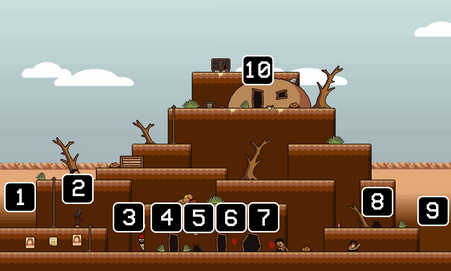 In order to pass past the truck in the road to Area 2, Brad must invite Fardy Hernandez into his party.

The order in which these doors need to be accessed is as follows:

When entering the crossroads, an unknown man is seen after being hanged. When he is walked under, the corpse will explode from pressure and can deal 100 damage to the whole party. It is recommended to stand next to the corpse and wait for it to explode before continuing. 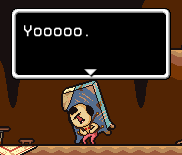 Climbing up the mountain, a door can be seen

that can only be entered once the Bicycle has been obtained. Once the Bike is used to cross the gaps, a Shopkeeper can be found selling the following items:

When exiting the cave at the top, a man can be seen on a cliff above, playing a trumpet. It seems that his playing is the 'background music' of the area as when seen by Brad, he will stop playing and look at him.

To the right a man's camp can be found. This has a pot that can trade an Empty Bottle for a Bottle of Soup three times. Also here is a Resting Area. This has a 1/3 chance of spawning a raider outside that will hit Brad in the head with a bat. This will lower Brad's SP and LUCK by 10 permanently. This can only happen once, however. Once Area 2 has been reached, this tent disappears, however the food will remain if not claimed. 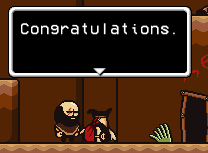 Retrieved from "https://lisa-rpg.fandom.com/wiki/Area_1_Crossroads?oldid=28557"
Community content is available under CC-BY-SA unless otherwise noted.