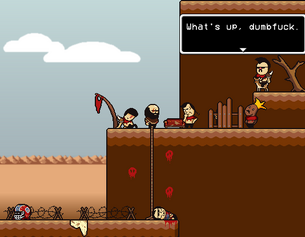 The area 2/3 transition is accessed east of the Area 2 Crossroads after Area 2 is completed by obtaining the TNT from Construction and finishing Wallys. It is a story heavy section leading to the next hub area. 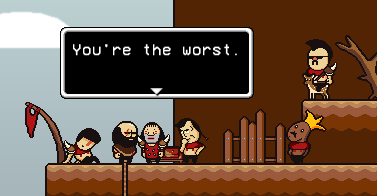 During this story section, Columbo and his crew confront Brad and his party, taunting that they are in possession of Buddy. This is also where Terry Hintz returns if he was kidnapped instead of Brad giving up his items. Terry scolds Brad that he really liked Brad and that they could have been best friends. Columbo tells Brad that he has now become Terrible Terry, Lord of Hurts and sets Terry on Brad. His in-fight name is Former Friend. Once defeated, he will drop his Diary Entries. Once defeated, or if he wasn't surrendered, Columbo's gang of Tom Cream, Sergei Rage and Larry Sports will fight Brad. After they are defeated, continue through a dark corridor to the east.

Brad enters another Joy induced flashback of Lisa's funeral. It is here we learn that he is the only one to show up to her funeral and leaves promptly. Upon trying to exit, mounds of flesh appear on the walls and the corridor extends. This flesh is strikingly similar to that of Joy Mutants, possibly showing how close Brad is to possibly mutating into one.


Afterwards, the EWC can be found, an area that can be used to train EXP for the next difficult fights. A save crow can be found here as well as a safe camp. 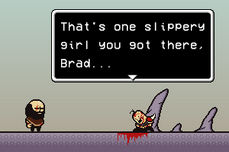 Continuing on Brad finds Sticky bleeding out in a Rando Army uniform. Sticky reminisces with Brad about how Brad understood him due to both of their abusive fathers. Before Brad attempts to kill Sticky, Rick comes to protect him appealing to Brad not to kill him, giving Brad a choice. If Brad chooses to kill them, Brad continues to slaughter them. If he lets them go, they leave Brad for now. 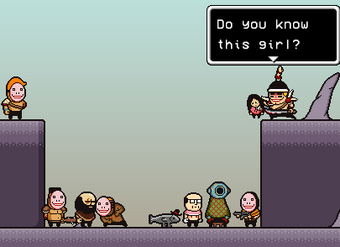 After leaving the two, Brad is further ambushed by two Joy Mask wearing goons and brought to Buzzo for another Sacrifice as he thinks that brad has not suffered enough yet. This time however, it isn't Brad that has to sacrifice, it is Buddy's nipple that will be severed. Brad's whole party, or Buddy's nipple. Note, if Buddy is sacrificed, this does not effect the plot in any negative way and so is recommended to keep brad's party unless you have prepared three party members you are willing to lose already. He gives Brad the Nipple as a reminder.


Catching up with Buzzo afterwards, Buddy has already escaped. Buzzo notes how "She would have been a real asset with the women". It is currently unknown what this is referring to. Unsatisfied with Brad's lack of suffering he demands another one of Brad's arms or all of his items.

Losing one of his arms will increase his addiction to Joy and will make him Withdrawn far more often due to the pain. 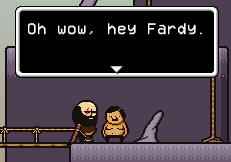 Continuing on, Brad will meet Tardy Hernandez, part of the Hernandez Family. As Buddy escaped, she stole Tardy's boat. He offers to take Brad if he rebuild's Tardy's boat. Tardy requires:

After this, Brad finally reached the Area 3 Crossroads


Retrieved from "https://lisa-rpg.fandom.com/wiki/Area_2/3_Transition?oldid=29040"
Community content is available under CC-BY-SA unless otherwise noted.