Bloodmoon Mountain, also known as the Blood Forest, is a sub-area in LISA: THE PAINFUL next to Area 3. The area is, as the name suggests, a mountain with a single blood tree on the top, with a dark red sky as a backdrop. It is populated by a number of the Bloodmoon Tribe, all of whom including the chief will fight Brad as he attempts to harvest the last blood tree for the boat.

On the fourth level down in the well, there is a hole in the wall beside the rope, this leads to the last Dojo, Dojo 4.

The second level up from the bottom has a false wall on the right that can be walked through, this contains a bag of Grandma's Shawl and a bag of Grandpa's Shirt.

Climbing the mountain, the aforementioned enemies will appear once interacted with. 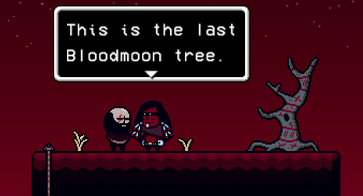 Once the top has been reached, Bloodiest Wolf can be found guarding the last Bloodmoon tree and will fight Brad to the death to defend it. Once Brad has defeated him, he will be able to cut down the last tree to obtain Blood Wood.


Retrieved from "https://lisa-rpg.fandom.com/wiki/Bloodmoon_Mountain?oldid=28456"
Community content is available under CC-BY-SA unless otherwise noted.