Buckets is a character found around the Roulette Building. He forces himself into Brads party after winning ten rounds of Roulette.

Buckets is a very enigmatic man, with a red coat and a Paint Can over his head. He seems to have very high skills with pistols and has a history with gambling.

How to invite to partyEdit

Buckets can be found above the Roulette Building. You will firstly find this around Area 2 through a regular playthrough and will be forced to play three rounds of roulette.

To get back there, head west from Area 2 and jump down the cliff to the west. You will take no fall damage. Once in the cave, head up and to the west and you will be back at the Roulette Building.

Once entering the area, the building is to the left. Buckets can be seen on the building and will become able to be invited after entering the Roulette Building. Once inside, Brad can pay 50 mags to take part in Russian Roulette. Each victory will multiply the gains from the Roulette, resulting in 600 mags and the Sunsetter, which is arguably the most useful gun-based weapon in the game.

Once this has been won 10 times, Buckets will appear on the bridge to the right on the building and will force himself into Brad's party.

Buckets fights with two guns (akimbo guns), and is the only party member in the game to actually have two different weapon slots on his equipment screen. Because of this Buckets is capable of dealing devastating amounts of damage to his enemies. Bullet Tap is a very powerful multi-hit skill that he starts out with by default, and Heads or Tails (despite having a 50% success rate) proves to deal massive damage.

Buckets has rather below average health and one weak stun move, but Buckets' main drawback is that he suffers from Joy withdrawal every now and then, which greatly hinders his attack power. Not only that, but even if Buckets were to take joy it doesn't seem to affect the damage output from his skills, but instead just brings his attack power back to normal. 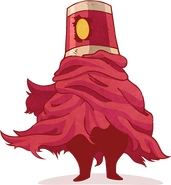 Retrieved from "https://lisa-rpg.fandom.com/wiki/Buckets?oldid=29598"
Community content is available under CC-BY-SA unless otherwise noted.