Being the head of his own gang, Buzzo wears a spiked helmet and spiked shoulder pads, along with black facepaint. He is often seen with a smile reaching from ear to ear with a questionable intent.

His gang seems to have an affinity for Joy, forcing many people to take the substance under the guise of making them happy. He force feeds Joy to Brad, starting an inevitable addiction even if Brad has not taken any for the duration of the game.

HEY, HOLD UP! There's SPOILERS down there, if you want to avoid them scroll until the next orange box.
Even a hint master shouldn't know the future.
-Postliminary Terry

When Buzzo and Lisa were young, Lisa would sneak out of the house at night to escape the oppressive environment, where she eventually met Bernard. Bernard grew to love Lisa, which she abused, convincing him to use a buzzsaw to mutilate various neighbourhood animals. Eventually she forces Bernard to mutilate her, so that she would no longer be attractive towards Marty. However, Marty's sexual abuse continues, and it is implied that Brad is also complicit in the abuse, albeit unwillingly. Eventually, Bernard, now called Buzzo for his deeds, refuses to continue mutilating Lisa. Lisa, unable to stand Marty's abuse and rape, and Brad's failure to help her, commits suicide. Buzzo blames Brad for failing to rescue his love, and is determined to blame anyone but himself. Eventually, he kidnaps Brad's adoptive son Dusty and saws off his face.

Sometime before or after the White Flash, Buzzo and his gang were employed by Dr. Yado spreading Joy across Olathe to satisfy Yado's perverse fantasies of creating a world filled with Joy mutants. During this time he also vents his frustrations on Brad; taunting his joy addiction and putting Buddy's life at risk simply to make him suffer. He also proposes ultimatums to Brad; firstly forcing him to choose between losing a Party Member, losing a limb, later forcing him to choose between Buddy losing a nipple or losing three Party Members and finally a limb (or another one, depending on an earlier choice) or losing all of his belongings. Yado and Buzzo ultimately succeeded in their plan, with much of Olathe being killed in the war, killed by the mutants, or mutating themselves. Having now served his purpose, Yado casts Buzzo and what little remains of his gang aside to act as the sole ruler of his new world.

As LISA: THE JOYFUL begins, Buzzo saves Buddy from mutant Brad and takes him away to a cave, yet is left unsure what to do with the broken shell of the man he has despised his whole life. Without his gang and without orders from Yado, Buzzo secludes himself in a small cave with his captive Brad and eventually comes to the conclusion that what he has done is evil. Determined to attone his deeds before he mutates from Joy use, Buzzo swoops in as Buddy confronts Yado, saving Buddy from Sweetheart and urging her to pursue Yado. After Buddy battles Yado's beasts, Buzzo flings a sword at Yado during the confrontation, knocking him backward into a pit. After a brief dialogue with Buddy, wherein he acknowledges that Brad was a good man who truly loved Buddy, Buzzo finally begins to mutate from joy use, becoming an enormous mutant before Buddy's eyes. Even in his Joy-addled state, Buzzo is able to thank Buddy for freeing him as he dies.

The spoilers are all done now, so you can now resume reading the rest of the article as normal.
I Hope you didn't ruin anything for yourself.
-Terr Unaware 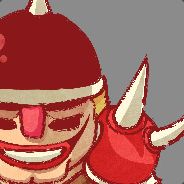 Add a photo to this gallery
Retrieved from "https://lisa-rpg.fandom.com/wiki/Buzzo?oldid=30250"
Community content is available under CC-BY-SA unless otherwise noted.