Construction is an area connected to Area 2. The main goal is to reach the end and obtain some TNT. 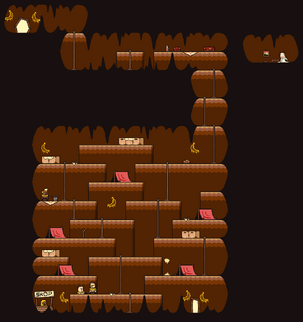 To the top right of the cave, is a hand made love doll. If interacted with, Laser Agar will walk in on you and fight you for making her cheat on him.

To the bottom is a shop with the following items: 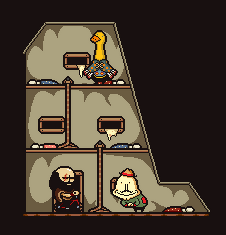 When exiting the cave, an Inn will be present and when entered an odd man will be present. This is a safe place to camp, however this will cost 10 mags. At the top of the Inn is Geese Thompson, a possible party member. If the Inn is used four times, Geese will invite himself into Brad's party. Up each Inn visit, he will also provide Brad with a new poem. 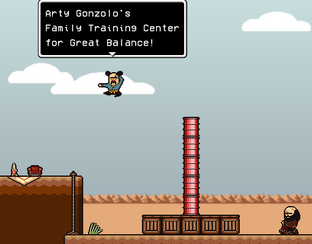 To the west, if the ropes above the entrance are climbed and the gaps jumped Dojo 2 Can be found. In order to fulfil Arty's patience test, Brad must wait on top of the barrels for a total of 150 seconds (2 1/2 minutes). Once completed, Arty will automatically congratulate Brad on his patience and award him a Gonzalo Style Scroll. 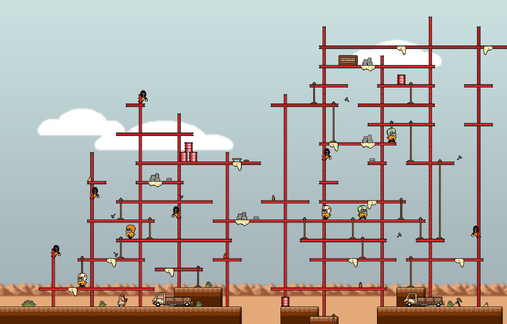 Entering from the bottom is the beginning of Construction. The goal is to reach the exit on the top right of the screen and enter Construction 2. There are a group of Blue, White, Orange and Green footballers running around the area. It is recommended to fight them to farm for their XP gain and items. Across the structure, men are throwing hammers, each dealing 10HP of damage to the whole party. To the top left is an Old Sock and to the bottom right is a Cigarette as well as a well that can provide the bottles of either Water or Dirty Water. If the rope next to the truck is climbed down, it will lead down to Body Path. 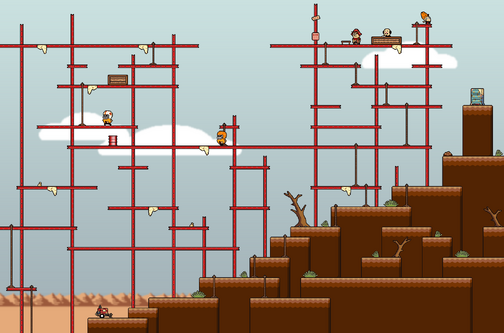 Construction 2 contains two more Football men as well as a diesel engine, providing four Firebombs if an empty bottle is present (There are many around Construction).

To the bottom left is a rope leading down to the Salvation Rangers and Dick Dickson. They will be fighting Blake and will break character to note that Dick is out of uniform. After losing commitment to the Rangers, Dick will join Brad's party.

To the top right is a bar with Carp, who can be invited to the party of Brad visits the Fishman Town, buying some Green Paste and giving it to him. The bar sells:

To the right, if dropped down from the Bar is a shop selling:

Construction 3 brings the introduction of the Bulldozer. Return to this Save Crow to pick up two extra bits of TNT once this segment is complete. This will begin a segment in which Brad can mow down enemies for 200xp each. You will meet a man in which the action button will need to be spammed to defeat, before this, Bottles of Soup can be taken. 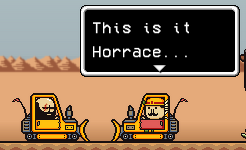 Before a fight with Horrace, a you witness a flashback consisting of Horrace's inadequacies in attempting to become a bulldozer driver. Upon having these horrific flashbacks, he attempts to back away and instead flies straight into a battle with Brad. After a fight consisting mostly of Horrace crying and losing control of his bulldozer, he will be defeated and leave behind Horrace's Hardhat. Once you enter the next screen, pick up some Diesel F. Bombs from the generator below as once the TNT has been picked up, Brad will immediately return to the Area 2 Crossroads.

Retrieved from "https://lisa-rpg.fandom.com/wiki/Construction?oldid=21493"
Community content is available under CC-BY-SA unless otherwise noted.