Dick Dickson, AKA Salvation Pink, or just "Pink", is a lazy middle-aged man who roleplays with his Salvation Ranger pals. He can be recruited by witnessing the second Salvation Ranger cutscene in Construction.

Most Hated Thing: His Overbearing Parents

A burnout party guy in his 40's, Dick leeched off his Mother to survive. Now he 'role-plays' with his fellow Salvation Ranger pals.

Dick is a balding man in his 40s who usually dons his Pink Ranger outfit, with glasses underneath. He is mostly found hungover due to his affinity for partying and lack of commitment.

After losing commitment to the Rangers, Dick will join Brad's party.

Dick is a very useful and speedy party member with a multitude of different attacks. One of his most devastating moves, Big Machine Gun Thrust, can hit a target up to 5 times at once and add up to well more than 1,000+ damage in a single turn. His Party Time abilities are also some of the best full-party stat buffs in the game, and if Dick is ever low on TP his Rager Pose can easily replenish enough back to be good for another 2 or 3 whole turns.

Unfortunately Dick suffers from Joy Addiction. When he is under the effects of withdrawal, much like Queen Roger, his attacks miss very frequently and if he does make contact with a target the damage output only goes as far as 30 or 40 at worst. Because of this heavy setback when under withdrawal Dick is forced back solely as a support member, which doesn't make him terribly useful if the team is already in Party Mode. 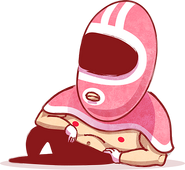 Add a photo to this gallery
Retrieved from "https://lisa-rpg.fandom.com/wiki/Dick_Dickson?oldid=29364"
Community content is available under CC-BY-SA unless otherwise noted.