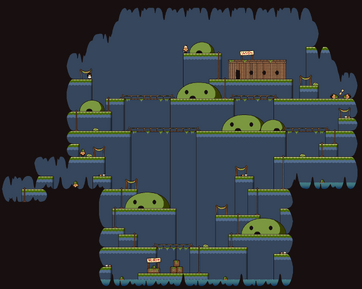 Fishman Town is an odd area accessed by dropping down a pond in Muddy Waters. It houses a breed of strange fish that have mutated to have bodies of humans, speaking an odd fish language. This area allows Green Paste to be purchased, allowing Carp to be invited to the party, the Garbage Map allowing access to Garbage Island and the ability to invite Harvey Alibastor to Brad's party.

To the bottom of the Fishman Town is a shop that stocks only Green Paste, a food that Fishmen seems to love. This can be given to Carp in Construction 2 to invite him to Brad's Party.

To the top is a man trying to make himself blend in with the Fishmen due to his hatred of humans. If spoken to a few times, his dialogue will change.

Upon reaching the top of the town, the Garbage Map can be found. Upon taking it, the Fishmen will take Brad to court due to theft. He will be defended in court by Harvey Alibastor. Once completed, Harvey will join Brad's party. The area can now be left by jumping in the pool at the beginning of the area.

There is a map named "Fishmen Inside", alluding to a possibility of Brad entering the houses in the town, this idea seems to have been scrapped however as the doors are now 'too small for you to fit'.


Retrieved from "https://lisa-rpg.fandom.com/wiki/Fishman_Town?oldid=24633"
Community content is available under CC-BY-SA unless otherwise noted.