The Joy Factory was a location in which Joy was produced. It is now but a Club House keeping a Woman captured for the member to "take their turns" with. In order to get past the Truck in Area 1 this woman must be saved. It is accessed by entering the third door of Area 1. A Bicycle from the Playground is required to proceed through Factory Road and Firebombs from New Roads are recommended for the Boss.

Once exiting the short cave, a hilly area is found, blocked off by Booker Clinton. To the left is a series of cliffs that can be jumped over by using the Bicycle leading to a water well. This can be used three times, having a 1/3 chance to provide a Bottle of Water and a 2/3 chance to provide a Bottle of Dirty Water. In order to proceed to the right, Booker must be defeated. Once defeated pick up a few stray Empty Bottles and use the Bicycle to jump over the gap. 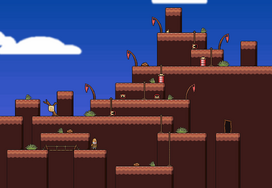 The next area of Factory road introduces the rolling enemies, Barrel Shooter and Barrel Clubber. The top area leads to the Joy Factory itself and the bottom door leads to the Factory Town. The first time you enter this it will lead to a flashback of Rick and Brad. Warning, once you turn back you will be ambushed by the Road Scholars. They can be very tough as they have roughly 3000 HP each. It is recommended to enter the Factory Town and fight them later on, possibly after the Men's Hair Club. 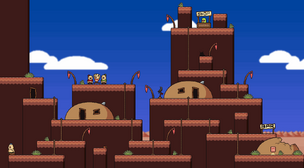 The Joy Factory town is presumably where the workers from the nearby factory used to live. To the bottom left is Mad Dog, who will join the party after you find his bat. The middle house contains a man who likes large butts, because they cannot lie. In the middle is a Save Crow. In the middle building you will find a man looking for a bottle of water. If you got a bottle of water from the pump in Factory Road, you can trade it to him for 40 Mags. The shop here sells: 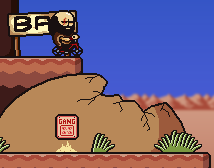 If you have the Bike, fall down into the roof of the Bar here. Inside are some Empty Bottles and Firebombs. Once the exit shaft is climbed, a Wet Stick can be found.

Once you re-enter the the door back into this area from the Factory Town, the Road Scholars will ambush you. They will demand all of your mags, or will fight you. This fight can be very difficult, so don't be afraid to use some Firebombs. If you fail, they will take your mags anyway and kill all the Factory Town NPCs including possible party member Mad Dog if you haven't recruited him yet. 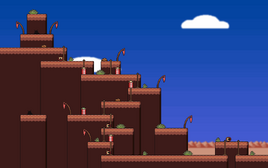 The one place of note in Factory Road 3 is the cave, accessed by dropping down the ledge towards the top. The fall will deal 500 damage to your party. This will access a cave housing the corpse of Mad Dog's son, a club sticking out of him. Obtain this club and bring it back to Mad Dog to invite him to Brad's party. It is recommended to kill all of the Barrel Bros to farm up EXP for the fights ahead. 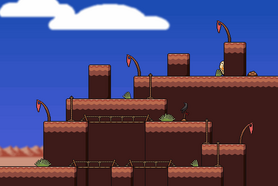 Here, a Save Crow and Scott Lawson can be found.

In the Factory club, lies the caricature of Widdly 2 Diddly. Once the Men's Hair Club has been defeated, he will kill himself.

Outside the club is Scott Lawson again. Once fought, Brad will kick him in the groin in retaliation, providing huge EXP gain. If the ladder is climbed down, the Barrel Game can be played. If completed in less than 30 seconds, Brad will be awarded Domestic Jerky.

The Factory Club Road contains a group of men talking about the girl kept captive in the Factory. They note how they heard she looks like 'a real horse', despite this they would give her a go and that the club are taking her in turns. They will catch Brad listening in and Steel Blackman will fight. To the right is a Camp.

Outside of the factory are a group of men attempting to break their way in to try and get to the woman inside. To the top left is a Crow leading into a hole in the wall to enter the inside of the Factory. 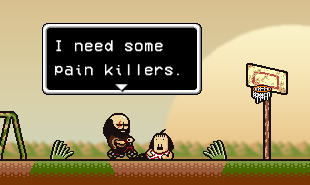 If Brad travels east, he will enter a Joy induced flashback involving Sticky, providing an insight into Brads past drug habits. Brad immediately tells Sticky that he needs some pain killers. Sticky notes how sudden this was for the start of a conversation in which Brad cuts him off and tell Sticky to hurry up. Sticky continues to ask Brad "Dude, What's wrong with you. you're acting funny." In which Brad tells Sticky not to worry about it. Sticky tried to appeal to Brad again and ask what's up to which Brad pushes again for drugs and tells Sticky to shut his mouth. Sticky refuses to give Brad drugs again to which Brad refuses to reveal what the problem is. This shows that even before the invention of Joy, Brad has had issue with painkillers due to the abuse of Marty. Exiting to the right leads to Factory Goldie.

Here, if the Barrel Bros are defeated and Brad can climb up the mountain, Goldie can be found. This can be taken back to Rooster Coleman in order to invite in to Brad's party. To the right is some Perfume and to the left is a Cigarette

This is a good place to farm XP, so it is recommended to fight them even if you don't want Rooster in your party. -Terry Hintz was here. 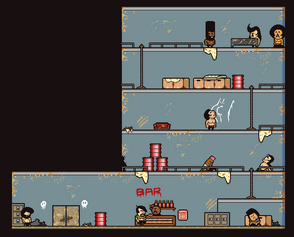 Inside the factory Brad can find many men who look like are taking Joy very often due to their speech. This makes sense as this used to be a factory where Joy was created. At the bottom is a Bar selling the following: 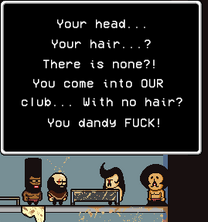 At the top of the Factory are the owners of the club, the Mens Hair Club Presidents. They welcome Brad, but shiver in disdain after finding out Brad is bald. They will initiate a fight against Brad's party. This fight can be difficult if the party is not farmed enough, however if Firebombs were obtained from New Roads, this shouldn't be too difficult. Once defeated, a hole will appear in the wall leading to the girl, Fardy Hernandez. When rescued, he can be used to clear the truck to the right of the Area 1 Crossroads.

Retrieved from "https://lisa-rpg.fandom.com/wiki/Joy_Factory?oldid=28353"
Community content is available under CC-BY-SA unless otherwise noted.