The Joy Lab is a special area that can only be accessed in Pain Mode. 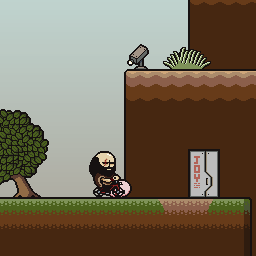 The entrance is located all the way to the East of the Nice Homes.

There's a metallic door with the capitalized word JOY on red font, a camera up in the hill like on the entrance of the Nice Neighborhood and not too far from the door there is a Joy Rider Mask on the floor.

There are some cables on the walls and 2 Metallic Joy Labs door on each side of the corridor. 2 Creeps inhabit this area.

This corridor is quite similar to the first one. But this also includes a couple of chairs and four metallic desks. 2 other Creeps lurk at this area.

The label of the first one reads Mindless Sheep. These Mutants can be found in large numbers at the Resort Island.

The second label reads Repulsive Waste. This Mutant looks like one of the Fishmen found in large quantities at Fishman Town.

The third label reads Violent soldiers. This mutant is clearly a Creep. And this one can be found all around the Joy Labs and the Nice Neighborhood.

The last label reads My favourite. This tank contains a Joy Mutant that shares a huge resemblance to the one that can be found with the dead Relax Researchers at Resort Island.

This area contains a night table with a lamp, a dining table with chairs, a bureau, a bed and a metallic door with a little window. This area is inhabited by 6 Creeps.

A relatively small room with only 2 points of interest.

The first and nearest one is a letter that reads "Sorry darling, but my actions are just." And right next to it lies the dead body of a woman. Some blood falls from her nose and mouth down to her arms.
SPOILERS
It's later revealed, at the YADO Epilogue that this woman is in fact Buddy's mother.

- Some decades have passed since the White Flash but the corpse looks fresh, meaning that this woman somehow survived the Great Flash. And because Buddy is the last girl in the world it means that she was probably birthed after the annihilation of the women in the world. This only gives more credit to the theory that this woman might be Buddy's mother.

- This woman's clothing is Slate Blue, quite similar to the sweater Lisa's mother wore on the corrupted Lisa's memory at the ending of LISA: THE FIRST. This opens a new theory that shows a scenario where Buddy is the maternal half sister of Lisa and Brad. The theory says that Ms. Armstrong ran away with Dr. Yado (Or maybe she was abducted). Marty Armstrong, devastated because of what happened, started to abuse his children and told them that their mother was dead.

- Strangely, her face is carved with a smile that looks like the Joy cult's mask.


Retrieved from "https://lisa-rpg.fandom.com/wiki/Joy_Lab?oldid=29633"
Community content is available under CC-BY-SA unless otherwise noted.