Lardy's Truck is a location in Area 1 of LISA: THE JOYFUL. It is owned by the leader Lardy Hernandez, who must be defeated in order for Buddy to become the most powerful person in Olathe. 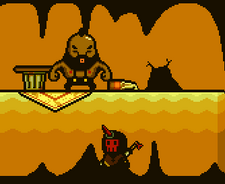 In the cave to Lardy's is a man upon a ledge. If Buddy is wearing a mask, he will leave her alone. If she has removed her mask, Les Snatcher will ambush them.

When exiting the cave, Buddy will ambush The Dunk Dudes, Terry Dunk and Dory Dunk. Upon defeating them, they will take control of their truck.

Rando suggest to take the truck to Lardy's convoy. As they drive, they will be attacked by Kala Peezer, Fred Doopey, Wahoo McMillen and Gary The Hot Soup.

Once the end is reached, some TNT can be found, which can be used to blow open the door in Vega Land. To the left is Lardy's Truck. If Lardy is too difficult you can head back to The List with the Truck Keys and fight Vega Van Dam first. It is also recommended to head back to the camp first and come back once healed. 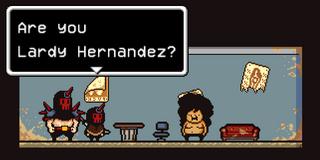 Once inside, Buddy will confront Lardy Hernandez. Depending on whether Buddy is wearing a mask will change the dialogue slightly. Once they have defeated Lardy, Rando and Buddy will return to The List.

If entered the truck then exited and walked right, a hallucination of Brad can be seen.

Retrieved from "https://lisa-rpg.fandom.com/wiki/Lardy%27s_Truck?oldid=28739"
Community content is available under CC-BY-SA unless otherwise noted.