Lisa Armstrong was the sister of Brad Armstrong, and the protagonist of LISA: THE FIRST. Due to the physical and sexual abuse of Marty Armstrong, she committed suicide.

Lisa is a young, fair skinned girl, wearing a long dirty white shirt and red shoes. Her hair covers her face and her face is never seen in full, and she also wears a pendant on a black string. Not much is known about her personality other than her unstable state of mind, seen in the events of Lisa: The First.

Lisa and Brad were born to Marty and an unknown woman. In Lisa: The First, it is seen that Lisa is kept in her room at all times and is sent back to her room when caught by Marty. As Lisa explores her inner mind, it's seen that Marty regularly sexually abuses Lisa and will attempt to be nice to Lisa to facilitate this. 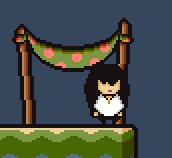 Due to the emotional strain of seeing this abuse happen in front of him, Brad contains within himself a lot of regret and feels guilty for allowing them to happen. He will often see hallucinations of Lisa, asking why he didn't stop Marty or why he let her kill herself, or simply overlooking him from the top of unreachable cliffs.

It is revealed in flashbacks and character dialogue that Lisa and Buzzo were childhood sweethearts. Hoping to make herself unattractive to Marty, she had Buzzo first mutilate a small animal, as practice, by cutting off its paw with a buzzsaw, before having him severely scar her. Although Buzzo hoped to "be her light", he acts like this, as well as her obvious mental issues, ultimately destroyed him and lead to his antagonism towards Brad.

The "Father" epilogue reveals a much darker twist in Lisa's life; strongly hinting that Marty forced a young Brad to drink alcohol and either watch Lisa be raped or rape her himself. It is possible that this ultimately drove Lisa to suicide. 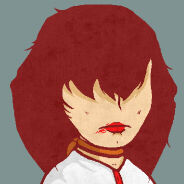 "What do you think you're doing? Who is she? Why...? Why do you love her more than me? Why do you hate me? You're supposed to take care of me! Why Brad?!"
Add a photo to this gallery
Retrieved from "https://lisa-rpg.fandom.com/wiki/Lisa_Armstrong?oldid=31572"
Community content is available under CC-BY-SA unless otherwise noted.