"You're wasting your time... You really don't get it do you? You really thought you could forget? Why are you trying so hard?... Accept it... You can't fight something that already happened... There is no understanding, no purpose... There is only life, and this one is yours... Accept it... I'm here to stay."
―Marty talking to Lisa

Marty Armstrong is the father of Brad and Lisa.

Marty is an overweight man with thinning black hair, sporting black sunglasses and a polka dot shirt. He's often seen sitting on a couch and watching TV as he drinks alcohol. He's shown to care very little about Brad, and he is strongly implied to have sexually and emotionally abused Lisa.

Not much is known about Marty before the events of LISA: THE FIRST. Marty has had two children with Brad and Lisa's unnamed mother. At the beginning of LISA: THE PAINFUL, judging by Lisa's apparent age, her mother seems to have died shortly after Lisa's birth. Marty spends his days watching TV and drinking beer inside his disheveled home. 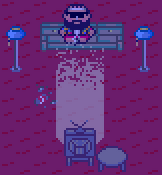 Marty is first seen in LISA: THE FIRST, sitting on his sofa watching TV. Whenever Lisa would attempt to exit the house, Marty would take Lisa back into her room. This motif is also seen at the beginning of THE PAINFUL with Brad keeping Buddy inside his house to protect her, and with him becoming an alcoholic at the same time. This may imply that there was a reason for Marty to keep Lisa inside to the degree that he did.

As the game is focused on the interior of Lisa's mind, there are not many lucid images of Marty, only twisted images of his drunken behavior and sexual abuse. It is seen from multiple images that Marty at some point during Lisa's childhood attempted to be a nice person, as seen by many images of him with rosy cheeks, a suit and love hearts above his head. One of these instances is Lisa next to a toy tea set. It is not known whether this was a genuine show of affection or Marty's emotional manipulation to allow his abuses to occur more easily as he would have begun drinking and abusing Brad by this time. Despite this possibly positive imagery, most of the images of Marty are twisted, some with horrific eyes, some with long necks and one atop a huge pile of flesh, hair and bile. Every image of Lisa's life is filled with faces of Marty. Even the face of her mother has been erased and plastered with his.

This abuse then went on to cause Lisa to commit suicide. This caused a drastic change in Marty's behavior turning him into a completely different person.

A widely accepted theory is that Marty was originally a kind father, but the death of Lisa's mother caused him to become abusive. 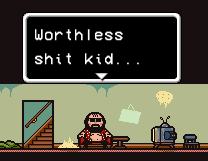 Marty is seen at the beginning of THE PAINFUL in front of his TV drinking beer, as he was at the start of the LISA: THE FIRST. At this time, Lisa is only a few weeks/months old and can be found in her bedroom. Brad and Lisa's mother would have recently passed, thus Marty would have only started beginning to drink and abusing Brad. He throws a bottle at Brad, chastising him for getting into another fight and ruining his clothes, claiming that he refuses to buy him another shirt. He sends Brad upstairs, as he did with Lisa in THE FIRST. Interestingly enough, this means he lets Brad outside, but not Lisa.

Marty is then mostly seen throughout the game as Brad's hallucinations when not taking Joy, showing how much he has penetrated Brad's mind just as he did Lisa's. He also appeared in Resort Island as a hallucination, with his face and neck stretching out of a TV. You cannot interact with this hallucination in any way, and it will not do anything to you.

Marty is seen in Aurora Town upon exiting a house, the landscape morphs into a horrid mass of flesh and Marty appears next to Brad with a baby, most likely Lisa. Marty drops her on the ground, telling Brad "You deal with it". Brad is unable to leave this nightmare unless he picks up the baby. Once picked up, 'Baby's Call' is played, further proving that this is probably Marty abandoning responsibility of Lisa.

A significantly aged Marty is seen again in an isolated cave near the end of the game, taking care of Buddy in a more positive manner than when he raised Lisa. However, Brad attacks him under the influence of his joy addiction. Marty then speaks to Brad one last time; showing remorse for his actions and that he had changed, apologizing to Lisa before being obliterated by a fireball thrown by Brad. He is then left with half of his body on his couch.

The only mention of Marty in LISA: THE JOYFUL is in the third Epilogue, where he teaches Brad to forget about his grandfather's karate fighting style and to pick up a much less professional way of fighting. At the end of it, Brad and Marty promptly go to "see Lisa" right before the epilogue ends, implying that Marty rapes Lisa afterwards and possibly forces Brad to do so as well.

Retrieved from "https://lisa-rpg.fandom.com/wiki/Marty_Armstrong?oldid=30074"
Community content is available under CC-BY-SA unless otherwise noted.