Mike's Cargo is a location east of EWC in between the Area 2 Crossroads and Area 3 Crossroads. It is a small valley known to the people of Olathe as the 'Devil's Machine,' due to the fact that those who enter never return, and are instead ripped apart - adding to the blood and bile which covers the terrain. 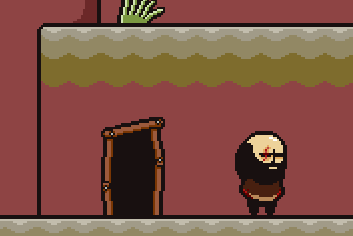 In order to get to Mike's Cargo, continue east of the EWC, past the door to Area 3 and reach Wrestle Village. Continue east to reach Trucker's Dip.

After a climb down a blood stricken mountain, the air transitions to a red haze, and the screams of men can be heard to the sounds of thumping metal on flesh. At the bottom is a large semi-trailer truck, with a bear printed on the truck and a duck printed on the trailer. The horn sounds as Brad approaches it, and he discovers the trailer door is locked. In order for it to be opened, the Key from the Bathhouse must be obtained.

Once inside, Satan can be found standing near piles of meat, and walls smeared with blood and bile. Upon being approached, he will make a remark on how many people have died due to their curiosity, and initiates a fight.

Satan is the most powerful enemy in the game, maintaining a high amount of health, damage, and perma-kill moves alongside the ability to inflict several status effects. Ample preparation should be taken before fighting this battle.


Retrieved from "https://lisa-rpg.fandom.com/wiki/Mike%27s_Cargo?oldid=25342"
Community content is available under CC-BY-SA unless otherwise noted.