Muscle Cave is a location access from the Area 2 Crossroads. Its main purpose is to train Brad's strength and gain XP if you are having problems with fights.

The first cave entered is the Cave of the Pretty Boys, a group of people whom can kidnap a member of Brad's party. If a member is kidnapped, Brad must return here in order to get them back. Once the Pretty Boys lair is entered, they will demand 200 mags. if Brad fights them, the party member will be killed and will fight Brad. Once Area 3 is entered and Brad has not retrieved his party member, they will kill them automatically. To the top left is an entrance to the Neck Cave

The neck Cave is a long tunnel leading down to a man sitting on a stool holding an Old Record. Once the record has been picked up, Henry Wyatt will appear and fight Brad. This record can be brought to Bo Wyatt in Muddy Waters which will prompt him to join brad's party. if Brad brings Bo back here, he will leave the party to mourn the loss of his brother. 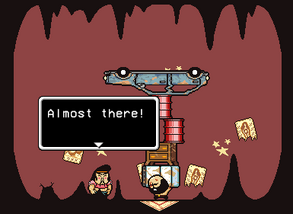 Heading back through Pretty Boys Cave and east leads to the Muscle Cave. Entering the top cave leads to the training area. Brad can choose to lift four different classes of weights, Light, Medium, Heavy and Murderous. As each level gets harder, more EXP for Brad can be earned. This can be repeated as many times as you desire. The weights rules are as follows:

Retrieved from "https://lisa-rpg.fandom.com/wiki/Muscle_Cave?oldid=26729"
Community content is available under CC-BY-SA unless otherwise noted.