Ollie is a sweaty Business Owner found on Garbage Island and can be invited into Brad's party after paying off his huge debts.

Most Hated Thing: Sweat drying to his skin

Ollie Olive Nickels is a heavyset, dark-haired, red-nosed male of Caucasian descent, who wears a (torn as shown in his official artwork) pink, ill-fitting jacket with a red band tied around the right sleeve, a small Straw Hat with a red-band upon his head, and a dark blue karate belt. The hair upon his head is very messy, presumably due to his continuous perspiration, and he possesses facial hair, in the form of a moustache and a goatee.

Ollie is notable for his constant state of anxiety from his failed business practices, and can be seen sweating constantly due to his unfortunate situation, this misfortune has lead to him becoming depressed. Ollie Nickels is also notable for his use of a southern dialect, such as the word "City-Slickers" suggesting that he could have moved states, or possibly have come from a more rural part of Olathe.

Head to the second screen to the east from the entrance to Muddy Waters (And the park scene if you haven't already).Travel to the gap, pictured, and drop down without a bike. You will now be in Fishman Town.

Once here, travel to the FIshmen Town and climb to the top to find two Fishmen look at a map. Pick up this map and let Harvey assist you with getting out of court.

Once finished, head to Shardy by climbing down the rope on the right hand side of Area 2 by the jerks. Give Shardy the map and he will take you to Garbage Island. Head east and you will be blocked by a guy in a Paper bag. He will only let you past if Brad is inflicted by Stink. Once Brad has Stink, he will let Brad through again in the future. (To attain Stink, buy a Nugget for 2 mags from Morty's Yard Sale in Karate Town.)

Head east, past the Cart race and Fly Minetti, fighting many Lunatic Refrigerators and you will find Ollie's. Pay Ollie's massive debt of 2 magazines and he will request to join Brad's party.

Ollie is an interesting party member who is best used for his "Dancing Machine Gun" skills, which not only targets every single enemy on the screen but also has a chance to make them scared or fall. His Bullet Cutting skills are also useful for inflicting bleed, and he also has plenty of status moves that inflict a multitude of status ailments.

Ollie's drawback, however, is that he suffers from depression, which hinders his stats quite noticeably. However His main drawback and defining feature is that he has double digit SP, meaning that he'll constantly needs SP refilling, even at a level higher then 25. 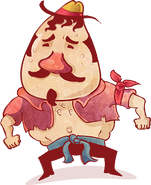 Retrieved from "https://lisa-rpg.fandom.com/wiki/Ollie_Nickels?oldid=29735"
Community content is available under CC-BY-SA unless otherwise noted.