Path to the Beginning is a road following Brads House and is the second area of Lisa The RPG.

The Cave is the first area of the Path to the Beginning. 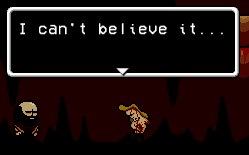 Entering the cave is an armless man who comments to Brad how he cant believe how ugly Buddy was, dying shortly after.

Further up is a dead body that, once walked past, will egg on Brad to fight him as he set a 'trap' despite being half dead. While Jeffery Coommings puts up a fight, half of the time all he can do is cough up blood.

If Brad walk back down the rope and over the above cave, he can drop down to find a secret stash of 50 Mags, however also taking 100 damage to each party member.

To the top right is a door that leads to the Boss Cave.

In the boss cave, are the Sugar Boy Drifters. They speak and disperse.

To the bottom left is a bag of Perfume.

To the right and the exit of the cave is the leader of the Sugar Boy Drifters, Sugar Mountain. After he is defeated, the path to outside can be entered.

The first area of Path to the Beginning is met with a heap of bodies, seemingly the corpses of the Sugar Boy Drifters. A blood drip from a fresh corpse can be heard from the tree nearby. To the west is a mortally wounded man and to the top is a bag of Domestic Jerky. To the east is a Save Crow and further east is Columbo Road. 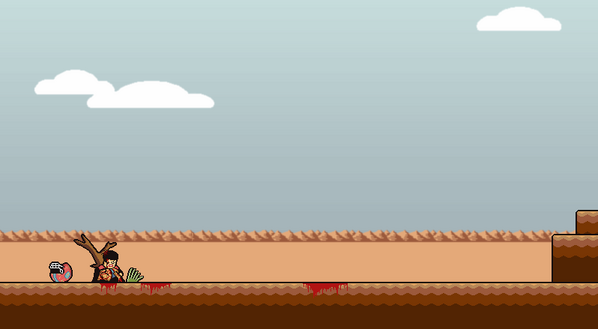 When entering Columbo road, the remaining members of the Sugar Boy Drifters are found as corpses next to a tree. One their their members Worn Helmet can be picked up. Upon moving past the tree Brad will meet an ill fate with a Cocola Cola Truck and wake up in Columbo Confrontation. 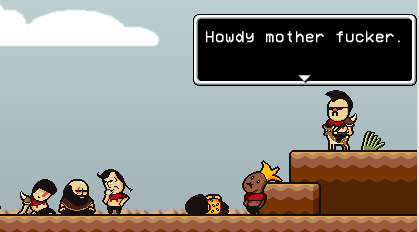 Upon waking up, Brad and Terry wake up with the grown up boys from the Neighborhood overlooking them. A voice from the distance speaks to Brad saying "Time is a great teacher. Sadly, it kills all its pupils." Alluding to Brad as a martial arts teacher. He notes that their paths are crossing again and how they spent their time as lads. As Columbo seems to despise Brad and possibly been ordered by Buzzo not to kill him, he doesn't kill him as he did the Sugar Boy Drifters and gives him and ultimatum: To lose all of his belongings or to surrender Terry to him.

This choice does not affect any achievements or ending. The result of losing Brad's belongings will be stripped of him, however Terry will survive. If Brad chooses to give up Terry's life, he kidnaps Terry and recruits him into his ranks. Terry is then next seen in Area 2/3 Transition. Once Columbo takes what you choose, Brad can continue east to Area 1 Crossroads
This is also when Brad starts suffering from the negative effects of Joy Addiction

Retrieved from "https://lisa-rpg.fandom.com/wiki/Path_to_the_Beginning?oldid=25872"
Community content is available under CC-BY-SA unless otherwise noted.