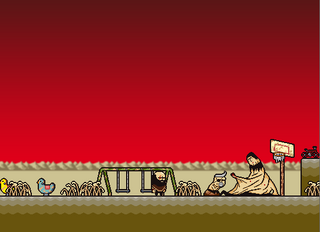 The Playground is an area connected to Area 1 Crossroads. It is usually accessed after New Roads and contains the Bicycle, required to access the Joy Factory.

There is a short cave with a Cigarette hidden behind a stalagmite.

There are three screens before the playground, where Snakes may be fought. Out of the cave there's a sign saying TURN BACK, along with some blood-soaked grass near it.

Near the right of the sign there is a sack containing Fancy perume.

On the third screen, there is a campfire. This camp has the standard positive/negative effects listed in Resting.

The playground is where the Bicycle is found, along with Charmy. There is also a man sitting in front of Charmy who advises the player on how to kill it. Once Charmy has been defeated the player can then advance to the Joy Factory. The music that plays here is "Child's Call."


Retrieved from "https://lisa-rpg.fandom.com/wiki/Playground?oldid=28582"
Community content is available under CC-BY-SA unless otherwise noted.