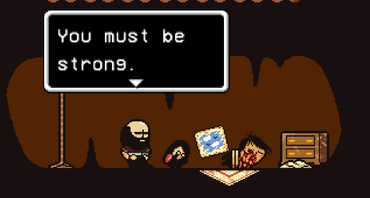 The game begins with Brad dragging along a white bag back to his house. Upon entering the house, it's revealed that he is bringing back a body for Buddy to kill. He insist that Buddy must kill this man, as she will be attacked when Brad is gone. After some reluctance, she pushed the knife into the man, killing him.

Buzzo: No need to show off to yourself. Remember our deal. He's mine from now on. I don't want your little friends getting in the way.

Yado: Well, I can't make any promises. My methods don't work on all of them. ... That Rando fellow... Is he okay? Is he still able to protect her?

Buzzo: if you're so worries about it, why don't you go protect her yourself? or are you too scared? Huh, you weak old man?

Yado: And listen up... From this point on, we are finished. You don't cross me, and I won't cross you... 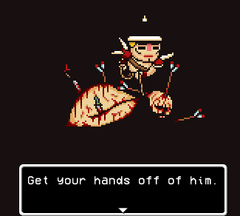 Buddy awakens to Brad, as a Joy mutant calling for Lisa, and attacks Buddy. After fighting, Buzzo interferes and breaks up the fight as Brad is now his property. It is recommended to Guard during this fight in order to obtain the MARTY EPILOGUE and obtain an achievement. You will know that you have successfully 'Watched Brad' as Buzzo says "Stand Back" once the fight has ended.

Buzzo controls Brad and stops Buddy from further hurting him. He then goes on to scold her for being around Joy and says that she is now free. 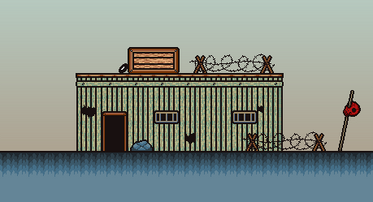 Upon exiting is the final area of LISA: THE PAINFUL. Exiting to the left will find a Save Crow as well at the pile of bodies left by Brad, as well as a passed out Rando. 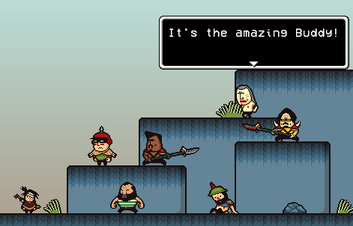 Continuing onto the right, Buddy meets a gang of men. One of which is Bolo Bugaughtiichi, one of the main antagonists and similar to that of Columbo. Seeing Buddy alone, he readies his men to capture her. An injured Rando swiftly comes to protect Buddy from them, however as he is softly spoken and his army being salughtered by Brad, he is of no importance anymore. Sweetheart ambushes them suddenly, giving Rando and Buddy enough time to escape. Here, Buddy can choose whether to trust Rando or not. This will change many dialogue lines throughout the game, however does not effect any of the endings.

Continuing east with Rando, they meet a group of men who have just defeated a Joy Mutant. They attack Rando in order to get Buddy. These are Tanaka Mendez, Wade Bryant, Ernie Fouller, Lenny Luigal, Paul Sweesey, Carry Dancer and Frank Caldwaller. 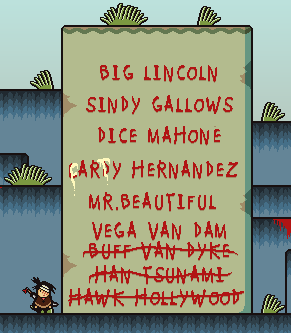 Further east is The List. Here is the list of the most powerful people in Eastern Olathe. Rando explains this list and that the members of this list left the Rando Army alone. If Buddy chose not to trust Rando before, she will seem more distant to him. 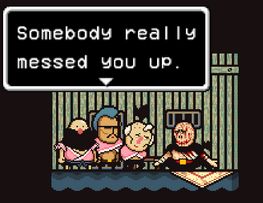 After entering a cave, Rando awake to The Unics, one being Bob from Bob's Dojo, informing that someone messed him up and that they had to tie her and knock her out. They tell Rando that 'Dale' was killed by them and for Rando to stay. Rando passes out. Upon waking, he find that Buddy has killed two of the men, whilst Bob escaped. Rando lies that he didn't know these men to which Buddy replies that it is time to 'get to work'.

What is next seen is a young boy walking through a park past pools of blood, to which he meets Lisa. The vision transforms into Buddy and says "Ready to play?" to which Buzzo awakes to the Joy Mutant Brad trying to escape. This ties us to how Buzzo knows Lisa and why he would care so much about her.

Continuing onto the east, Buddy will reach the Area 1 Crossroads.


Retrieved from "https://lisa-rpg.fandom.com/wiki/Pre-Area_1(Joyful)?oldid=26554"
Community content is available under CC-BY-SA unless otherwise noted.