R.T. is a homeless man found at The Beehive, looking for his lost Duffel Bag, "Duffie".

He is found towards the middle of the game and so is a strong candidate for a party member. His skills, due to Duffie, can cause many status effects as well as him being a wild son of a bitch.

RT has no problem living in this new world. This type of living is nothing new to the hardened hobo. Although being driven insane long ago, he still is more than capable of surviving the apocalypse.

R.T is probably the weirdest looking out of all the party members, having a very orc-like appearance. he has sickly green skin and nose, with permanently closed eyes and two bottom teeth that goes beyond his lip. He wears a black beanie and a muddy blue coat that appears in his artwork, being held by two bandaids on his pockets and a red square stitch on his back, although the holes and bandaids are absent from his sprite in-game.

R.T. is very simple-minded, only speaking few words and grunts. His biography claims he's insane, and it shows given how he slams into and holds enemies in battle. He also carries a duffle bag which is very sentimental to him.

How to invite to PartyEdit

In order to invite R.T, Brad must obtain Duffie from the bottom left door in the Sands area. Sands can be found from entering the crack in the wall in the bottom right of the Area 2 Crossroads.

Once Duffie is obtained, Brad can visit R.T at The Beehive and in trade for Duffie, he will join the party.

R.T.'s main gimmick is revealing many different contents from his duffel bag, most notably strong fire attacks. In addition he also sports high HP and strong physical attacks. His final move, Nightmare Hold, has a 80% chance of putting the target to sleep (not counting foes who resist the status), which is perfect either for battles with more than one enemy, or stalling to use as many stat buffs and debuffs as possible. 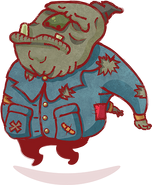 Retrieved from "https://lisa-rpg.fandom.com/wiki/RT?oldid=29348"
Community content is available under CC-BY-SA unless otherwise noted.