"Yoooo! What's happenin' my man?! You gotta couple of mags for me? I'll run with your pack brother!"
―Rage Ironhead

Rage Ironhead is an energetic pro-wrestler known for his devastating Headbutts. Rage Ironhead always puts the battle first and his health second. He has high speed and attack, but somewhat low defense. He is the creator of 'Ironhead Lucha Libre'.

The founder of Ironhead Lucha Libre. He lives to soar. Although he is a hit with the ladies, his only true love in life is the ring.

Rage is a tan likely hispanic man who wears a red luchador mask, pitch black shawl and wristbands and a gold belt.

Rage is a very hyper hyperactive person who's rather loud, going on about his head and chants after a battle.

How to invite to PartyEdit

Rage Ironhead is located in a bar in the Mountains found by going through the bottom left door in the Crossroads, under the word 'Let's' in 'Let's find her'. When spoke to and given 70 magazines, he will join Brad's party.

Rage is a strong party member who is one of few that have the ability to use combos. Rage's main quirk is using a series of headbutt related moves to deal powerful damage to the enemy. Overall his attacks alone do average damage, but when coupled with his combo abilities it can all add up to deal some massive damage.

The drawback to Rage though is that he's not real varied in attacks; each new skill he learns is just a more powerful variant of the last. Coupled with his weak defense and rather lacking HP he is not very capable of taking a lot of hits. Overall if you want a bonafide glass cannon for your team then Rage has got you covered.

When used, the above skills will deal individual damage, as well as the damage of the relevant skill (if completed) 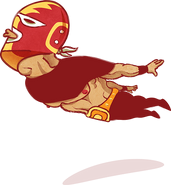 Retrieved from "https://lisa-rpg.fandom.com/wiki/Rage_Ironhead?oldid=29916"
Community content is available under CC-BY-SA unless otherwise noted.