The Salvation Rangers are a group of sentai-esque vigilante roleplayers first encountered in the Area 1/2 Transition, on the way to Area 2.

"Do your best to drink water and eat your veggies!"


Joy addict turned Joy Mutant and the leader of the group, and also the most corpulent of them. His animal cry is an eagle's call.

"Keep your chin down, and your eyes up around bullies!"


Joy addict turned Joy Mutant and possible murderer of the team causing the Fall of The Salvation Rangers. His animal cry is a dog/wolf's bark.

"Always listen to Dad, even if he's been drinking!"


The buffest of the group, not much is mentioned about him. He complains that Demon X stole his pose. His animal cry is the roar of a lion/tiger.

"Don't pay for drugs, let your friends do that!"


The tallest of the group. He also likes to lie upside down on his head. His animal cry is a series of dolphin clicks.


The shortest and youngest of the group, Using his past trauma as a "size challenged" kid he gets the Rangers out of the grasp of Demon X for a while. His animal cry is a monkey yelling.


Joy addict and past member of the Salvation Rangers.

His real identity is Dick Dickson and he is a possible companion able to be recruited at the Construction site in Area 2.


He is the replacement of Salvation Pink. He appears to be a bit of a jerk, as he roughly calls Brad out for not going along with their script if the player maneuvers around to talk to him during the Demon X encounter.

The Salvation Rangers are first found after finishing the Roulette game on the way to Area 2. You must then defeat Blake the Snake. Once Blake is defeated, they can next be found in the second area of Construction reached by going into the large Door in Area 2 and going to the bottom of the cave. Head east. Once on the second screen of Construction, head down to the bottom left down a rope, and you will meet the Rangers, in which Blake will break character to note that Dick is out of Uniform.

After losing commitment to the Rangers, Dick will join Brad's party.

Continue to Sands, to witness the third cutscene, in which Demon X will easily defeat you. Once the dialogue ends, head to the crack in the bottom right corner.

Once in, they will quickly retreat. You can then finally find them at the top of Seesaw Valley and experience their final act.

The Fall Of The Salvation Rangers Edit

In Holly Wood, Red lies as a huge blob with the bodies of Yellow and Beige on him. Yellow most likely mutated in some way as well, as his hand still twitches as you pass. It's not known if they are dead or just in a calm, non-violent state most Joy Mutants are after a killing spree. 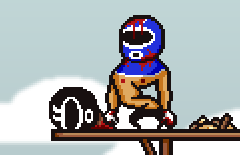 It is unknown what happend to Green after the fall of the rangers, but he is later found in Lisa: The Joyful where his name is revealed to be Tooley. Black's head can be found torn apart not too far from his body where Blue, as a Joy Mutant covered in blood, lies.

It's revealed that Salvation Green is still alive. When you obtain the Green Helmet at hidden right in W2D cave. After obtaining the helmet, return to Buzzo's hideout and you'll find him. His name is revealed to be Tooley.

If you return to Tooley after you've finished The List, you will find he's hung himself, likely because of what he's witnessed.

Retrieved from "https://lisa-rpg.fandom.com/wiki/Salvation_Rangers?oldid=28867"
Community content is available under CC-BY-SA unless otherwise noted.