Shocklord is a professional EWC wrestler who fights in a tag-team with Brad in their tag-team stable "Arm-Shock". He seems to blow his entrances and misses his attacks often. Shocklord is found at the EWC and joins Brads party after winning the Tag Team Championship along with Brad.

Most Hated Thing: Letting people down

An incredibly powerful Sports Entertainer. His tragic debut has kept him in a perpetual state of failure. This keeps him from unlocking his true potential. Shocklord may never recover from his horrific Sports Entertainment debut.

Shocklord is a heavy set Professional Wrestler with a blue mask, and seems to screw up his lines and moves quite often. He is aware of his limitations and acknowledges to Brad that he is holding him back during the Tag Team Championship.

Shocklord is found at EWC, east of Area 2. He can join Brad's party once Brad and him win the Tag Team Championship. To do this, speak to the manager in the room to the right if the arena and lose the first match. Brad will then have an option to choose between three fight types; for Shocklord you need the Tag Team option.

NOTE: If you complete the 'Eternal Championship' storyline, all wrestling options will be disabled. Complete the following Tag Team arc before starting the Eternal storyline.

When fighting alongside Shocklord in the stable 'Arm-Shock', you will fight the following stables:

Once the above stables have been defeated by Arm-Shock, Shocklord will join Brad's party.

Shocklord is probably the simplest party member you could ever recruit. He only has one attack, high HP, and big damage output. While his method of damage could technically be compared to that of Fardy Hernandez, that would actually be a pretty unfair comparison. Shocklord has much better bulk than Fardy, much better attack, and his Big Shock hits far more reliably than any of the trucker's Truck slam skills.

Shocklord's main drawback obviously is that he only has one move, and he never learns anything else, he has no strategy or versatility. So if you want a party member who's simple in design but can wreck enemies, then look no further than Shocklord. 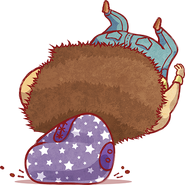 Retrieved from "https://lisa-rpg.fandom.com/wiki/Shocklord?oldid=29686"
Community content is available under CC-BY-SA unless otherwise noted.