Skull Town is an area accessed via the Area 2 Crossroads and blowing open a hole in the bottom right door.

On the way to Sands, is another cave leading to Garth, A possible Party Member. He will join Brad's party if given 150 mags.

Upon entering Sands the Salvation Rangers, if met in Construction 2, will be standing up against their arch enemy, Demon X, and request Brad's assistance. If Brad loops over the top and speak to Salvation Beige, he will note how Brad is ruining their "thing". He will defeat the party with a single hit each. (If Demon X is defeated he will say "You absolutely are an asshole".) Upon losing, Salvation Black will have a painful flashback about getting stuck in the door of his house due to his weight while his father receives a lapdance from a male stripper calling him his "thin hipped new son". This causes him to know that X's weakness is his horns. Upon entering the cave, Brad follows them in eventually followed by a slightly disabled X. They then proceed to flee.

Entering the door on the bottom left with lead to a Duffle Bag that can be given to RT at The Beehive to invite him to Brad's party.

To the east is a Camp and even further is an odd statue with the name "Tia" carved into it. Next to the statue is a few bags of Perfume. If this perfume is taken to the shopkeeper in Skull Town near Dojo 3, he will give you 80 mags.

If the rope next to the entrance to Sands is climbed and Brad uses his Bike to jump over the various Gaps, he can enter a door which leads to Skull Town.

Once you immediately enter Skull Town, drop down to the left and enter the cave, a further hole in the wall will lead to Dojo 3. 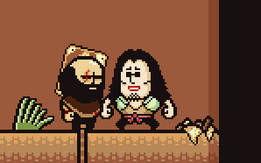 Upon walking through this cave will lead to the Skull Town trader. If given the Perfume from Sands, he will give Brad 80 mags. He sells the following: 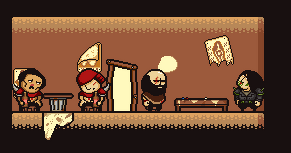 Walking right from the entrance is a room containing a kickstarter backers enemy, Gavin Davidson. 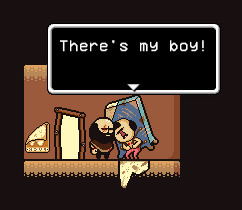 Up the rope is Chester, selling the following items:

Towards the top of Skull Town is Ajeet Mandeep, a sensual playboy who despises Joy. If Brad has taken Joy exactly twice (This was supposed to be more than 2, but current is equal to) he will sneer at Brad. Otherwise, he will offer to join Brad's party.

Finally just above the entrance is another kickstarter backer's enemy, Iori Stevens.

Retrieved from "https://lisa-rpg.fandom.com/wiki/Skull_Town?oldid=27559"
Community content is available under CC-BY-SA unless otherwise noted.