"Heh... Haven't heard that name in a while... That's what my dad used to call me. That's why we clicked... You were the only one that understood what it was like. We used to be so alike. Poor, beaten... Fucked up kids. Except, I kept my chin up... You fell down. You don't have an excuse... Not with me. All this stuff with Buddy, it's bullshit. What happened to us? What happened to survival? To brotherhood? "
―Sticky after Brad confronts him and calls him Tony

Tony "Sticky" Angoneli, is an Italian-American (judging from his last name) male with black hair, and fair skin, he has small, beady eyes, a large nose, a long, tall strand of hair on the top of his head, a hair-comb mustache, and most remarkably, Sticky's head has a phallic appearance. He wears a dark green poncho and a pair of black pants. When Sticky ends up joining the Rando Army, he ditches his green poncho for a dark blue one, and starts wearing a red spiked shoulder pad and belt, he also starts wearing a leather strap, to keep his shoulder-pad in place.

After Brad finishes the boat that Tardy Hernandez requested him to build, and if he was spared by Brad, Sticky starts wearing a pair of blue bandages around his eye, which he lost in a mysterious incident, and starts carrying an assault rifle.

Sticky (Tony Angoneli) is Brad's former friend. He kidnapped Buddy and brought her to Rando, causing Brad to begin his search for Buddy. He is injured after a battle between Rando's forces and Buzzo's gang. Brad finds him on the brink of death and is given the choice to kill him or let him live. However, Rick comes to protect Sticky, so Brad must either kill both of them or let them both live. If Brad chooses the latter option, Sticky will show up just before Brad leaves Area 3 and must be defeated to proceed.

Sticky is seen at the beginning of the game, being defended by Brad from Columbo and his gang of friends. He is next seen in a flashback of Brad near the Joy Factory. In the flashback Brad immediately tells Sticky that he needs some pain killers. Sticky notes how sudden this was for the start of a conversation in which Brad cuts him off and tells Sticky to hurry up. Sticky continues to ask Brad "Dude, what's wrong with you. You're acting funny." In which Brad tells Sticky to not worry about it. Sticky tried again to appeal to Brad and ask what's up to which Brad pushes again for drugs and tells Sticky to shut his mouth. Sticky refuses to give Brad drugs again to which Brad refuses to reveal what the problem is. This shows that even before the invention of Joy, Brad has had issue with painkillers due to the abuse of Marty.

Sticky is later seen during Brad's heaviest Joy hallucination after being forcefed the drug by Buzzo. Brad sees Sticky as a massive neck with his features grossly exaggerated at the very top to form a head and face. His form is somewhat phallic, alluding to Brad's fears of Sticky molesting Buddy.

Sticky is seen again in person as Brad enters the crossroads of Area 3. Rick will appear and try to defend Sticky from Brad, and it is the player's choice if Brad kills them both.

Finally, if the player chooses to spare Sticky and Rick, the former will reappear on the Area 3 Shore and will attempt to fight Brad. He is, however, a pushover at this point.

He's mentioned by Buddy when Rando and Buddy were hiding from a Joy mutant. Rando stated that he trusted Sticky. Oddly, Buddy did not talk about Sticky supposedly molesting her, in fact stating that he never touched her. Instead, she said that he told her lots of stories and cried a lot.

He's seen as a hallucination after Buddy killed all 6 leaders. 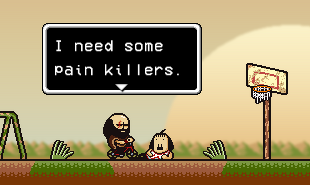 Retrieved from "https://lisa-rpg.fandom.com/wiki/Sticky_Angoneli?oldid=30259"
Community content is available under CC-BY-SA unless otherwise noted.