Stone Village is a location in LISA: THE PAINFUL connect to the Area 3 Crossroads. It contains a possible party member, Crisp Ladaddy and a race with antagonist Columbo. 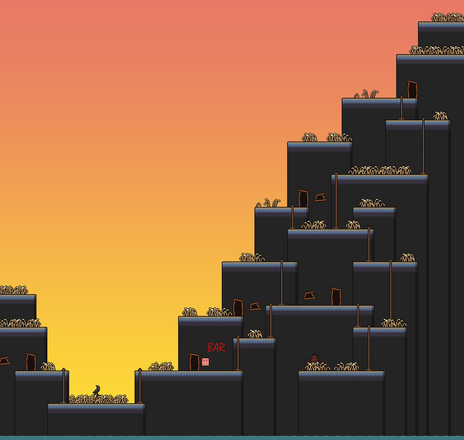 In the cave to Stone Village is the entrance to the Biker Gang, who can kidnap a party member if a camp is rested at after Area 3 is reached. When one of your party members are taken by the gang, you can return here to find that all of the bikers are dead, except for one, a Joy Mutant named Rex Thunderstorm. Upon Rex's defeat, you will not get your party member back, and you now can interact with a pile of flesh behind him. Upon interacting with the pile, you get a message reading "Is this...?" Possibly implying that the pile is actually the corpse of your kidnapped party member.

Towards the bottom is a bar containing the following items:

To the bottom right is possible party member, Crisp Ladaddy. In order to invite Crisp to Brad's party, you must firstly visit the BathHouse, found by visiting the door to the right of the 'Gang Selection' sign in Area 3. In the Bath House, Brad will find Toby tied up and will ask to be taken to Crisp.

Once Brad now talks to Crisp, he will ask what Brad want's in order to keep Toby safe. There will be three options:

To the bottom is a Save Crow. 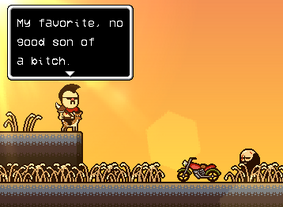 West is a lone Bike in a valley, when approached, Columbo will appear from the side and will note how Brad must have defeated his gang previously, shrugging it off. He reveals to Brad that the Boat he is looking for is further west and that Columbo will race Brad, the Boat being the prize. If Brad wins, Columbo will rewards Brad with some Hair-Gro. Regardless, Columbo reveals that there was in fact no Boat and that, as always, he was messing with Brad. Finally, he then off his pet deer Spaghetti and apologizes for giving hard times to Brad, then offing himself to be with his gents and his deer. After a conversation, an achievement will be unlocked and the area cleared.

Once finished, the crack in the wall can be used to transfer back to the Cave to Stone Village.

Retrieved from "https://lisa-rpg.fandom.com/wiki/Stone_Village?oldid=25144"
Community content is available under CC-BY-SA unless otherwise noted.