The Beehive is a brothel for men who miss women who disappeared in the White Flash and are so desperate for a "loving touch" that they will pay Queen Rogers male prostitutes/hookers/strippers (or as they're nicknamed in the game, Bees) to love and comfort them. While a majority of the Bees seem confident, they're shunned by most of Olathe's population and are confined to this area, protected by Queen Roger. Brad can become a Bee and earn tips for doing this. The Beehive can be accessed by the Area 2 Crossroads and then by walking east through Muddy Waters.

Inside the Beehive is a series of rooms where clients are being serviced by a Bee. In one of the middle rooms is a Bee in a bathtub who will increase Brad's defense by 3 for free by showing him "What a real man feels like".

On the bottom floor is Kim Sex Machine. He will ask if Brad wants a dance and whether Kim is sexy. If Brad responds positively, Brad will receive a Tissue. If not, Kim will initiate a fight. Beware -- he has two instant/perma kill moves, so fighting Kim is not advised. 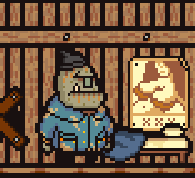 In one of the middle floor rooms is RT. Whom can be invited as a party member if he is given his Duffle Bag (which he nicknames Duffie) found in the bottom left door in the Sands area.

Upstairs is the leader/caretaker of the Bees, Queen Roger, a possible Party Member. In order to invite Queen Roger to Brad's party, you must speak to Roger and begin the Bee Job mini-game. Here you will 'service' clients by loving them. Serve each of the three clients who are "battled," then speak to Roger again. He will then join Brad's party.

Retrieved from "https://lisa-rpg.fandom.com/wiki/The_Beehive?oldid=24410"
Community content is available under CC-BY-SA unless otherwise noted.