Vega Land is a location in LISA: THE JOYFUL, connected to the Area 1 Crossroads. It is controlled by one of the major leaders in Olathe, Vega Van Dam. Buddy must defeat Vega in order to become the most powerful person in Olathe.

On the road to Vega Land, is a Joy Mutant, Bobo, around piles of mutilated bodies. Once the end of the cave is reached, Buddy can walk into the wall to the left to meet a Shadowy Figure and a bag of Domestic Jerky.

Once exiting the cave, a Joy Mutant, Cooper will be walking around. Once defeated, use the TNT obtained from Lardy's Truck to blow open the door.

In the second cave is a wall that can be walked through after the first rope down and yields a Lucrative Tea. Further down is a Fancy Perfume as well as the entrance to Vega Land.

The first enemy, Joey Viper can be instantly killed if Buddy dashes off the platform above. If not he will initiate a fight.

Further to the east are the Vegas Boys, Johnny Walrus and Gary Panther. Gary can be assassinated by dashing on him from the right. Further on are Paul Peacock and Dig Rhino. To the right of Vega HQ is a Save Crow. 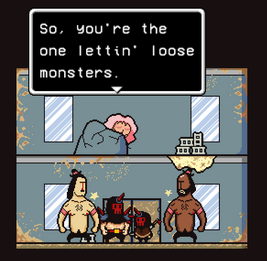 Inside the Vega HQ are Vega and his team. Depending on whether Buddy is wearing the Joy Mask, Rando Mask or no mask, different sequence follows. Once defeated, Buddy will return to The List.


Interestingly enough, Vega has some dialogue for when Buddy is using the Joy Mask. Usually a player would never see this as the Joy mask is obtained in the Area 2 Crossroads. Vega's speech is:


"One of Buzzo's little men? You working with that sick fuck? Rando-Bobando... You have sunk low. That's a path you shouldn't go."
―Vega


Retrieved from "https://lisa-rpg.fandom.com/wiki/Vega_Land?oldid=22927"
Community content is available under CC-BY-SA unless otherwise noted.